UNABLE TO PROGRAM PIC32 DUE TO FLASH ERROR: "Program memory is not blank"

My Cyton board is fully assembled and while I had a major victory with getting the RFDuinos to work (which was documented on another thread), that was rather shortlived. The next major issue involved having to program the chip PIC32MX250F128B. Since I assembled the board from scratch, it's obvious that the PIC would be blank or have a minimal factory bootloader, nothing which would allow it to communicate with Arduino or be programmed OTA via the RFDuinos. So, I knew I had to flash the PIC and found the requisite bootloader UDB32_MX2_DIP.hex on one of the OpenBCI github links (will have to post that later).

NOTE: The chipKIT github hosts a relatively newer version of UDB32_MX2_DIP.hex (~189 kB) which has been compiled by a newer version of MPLAB, but for some reason, the new one is NOT recognized as a valid firmware by their own IDE or IPE when you attempt to import or load the hex for flashing. Strange, I know.. but just thought I should mention this, incase someone experiences the same issue. Anyway, I stuck with the older version of the bootloader provided here on OBCI's Github archive (which is only ~8kb)
.
Next: Opened MPLAB IPE v4.15 (I havent installed their more recent v5+/v6+ versions, in the interest of saving space on my drive). Set the ICSP option to "Power Target Circuit from Tool" and then clicked Connect. PICKit3 detected the PIC32 chip successfully and this was the initial log output:

I loaded the working version of the UDB32_MX2_DIP.hex bootloader and was able to burn it successfully to the chip using PICKit3, that went well. The blue LED started blinking gleefully, so I knew it was ready to accept new code. So far, so good!
.
Next, I attempted to upload the DefaultBoard sketch to the PIC from within Arduino. I figured that since the bootloader was already flashed, it should be able to accept the firmware OTA, so I switched the Port# to that of the Dongle (which had already been flashed with RadioHost32.hex by now). The compilation was successful, however the upload failed. Please see the error as displayed below: 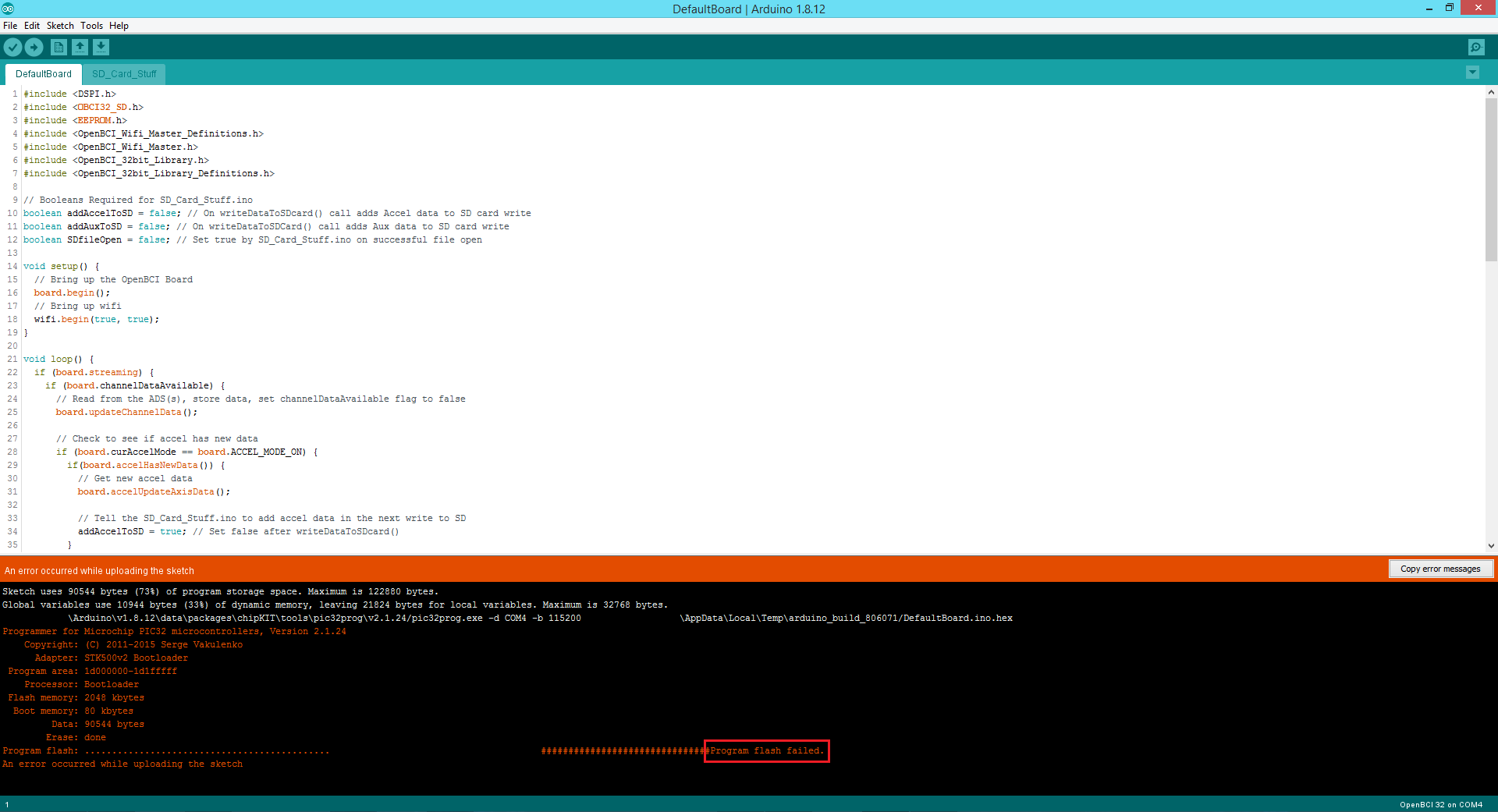 .
Out of curiosity, I decided to see what would happen if I flashed the PIC with a blank sketch instead, and lo & behold, that was flashed successfully to the PIC! (see below): 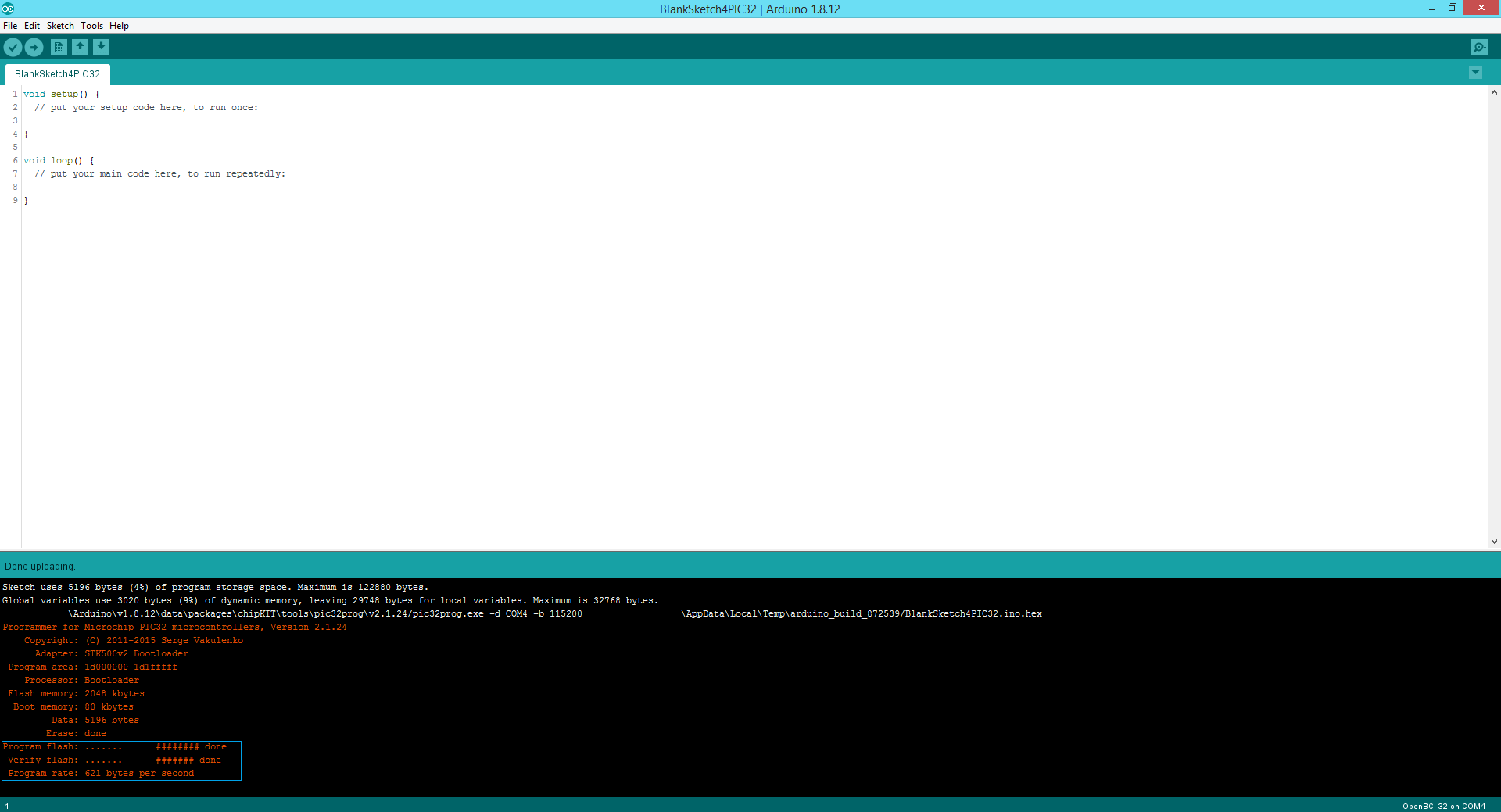 Coming back to the Cyton firmware: I tried uploading DefaultBoard several times, checked all the wiring, brought the RFDuinos closer to each other, etc.. but nothing helps. Btw, I've already read through this entire detailed thread for clues but none of the tips have worked for me at all: chipKIT uploading tips & restarting bootloader

.
Finally, I abandoned the Arduino-RFDuino-PIC route and decided to flash the firmware directly using PICkit itself. Copied the compiled DefaultBoard.ino.hex file from the Temp folder and placed it in a more convenient location. Loaded the DefaultBoard firmware hex into IPE, clicked Program and this is the error that results:

.
When I try to Erase the chip and do a Blank Check immediately after, the blank check fails with a similar error:

Seems to be an issue with writing to the chip's Flash starting from memory address 0x1d010000 onwards, I deduced this after running Verify.. this was the result:

I do suspect that this Program Flash region is being write-protected, so is there a specific #pragma or predirective that needs to be specified in the code in order to disable the chip's protection scheme?

I also read on another forum that one person was able to get past this error by programming the PIC in Low-Voltage mode, while they weren't able to do so in regular mode. But I dont see anything specific about LVP mentioned in this PIC32's datasheet, does anyone have any information or clues to this??

.
Tagging @wjcroft , @Shirley , @retiutut for any help & guidance in this matter