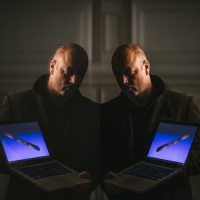 I’d like to invite the members of this forum (and esp @wjcroft) to the online launch of Nathan Semertzidis and I new artwork machine_in_the_middle at 5pm UK time tomorrow (30th).

We use an OpenBCI headset and ML built on top of Brainflow to detect the emotional state of World Champion Snooker Player Steve Davis (famous for never expressing any emotions). Then we animate his face into the expression that the machine thinks he is experiencing. (using EMS).

More details in the reply below. Hope to see you!