We’re very happy to announce that the first OpenBCI Hackathon was a great success! Over the course of this past weekend, 35 creators from a variety of backgrounds, ranging from electrical engineering to software design to visual communications, joined us in an amazing effort to help expand the capability of our hardware and its rapidly growing suite of software frameworks. Participants of all ages joined us from a number of elite institutions, including MIT, NYU, Parsons, and Columbia.

The weekend began with a series of mini-lectures given by OpenBCI co-founders Joel Murphy and Conor Russomanno. The lectures addressed the current state of research-grade, commercial, and DIY BCIs, as well as, more technical information regarding the existing foundational OpenBCI technology. Following the talks, hackathon participants split in to focus groups addressing challenges in one of the following domains: hardware challenges, software interfaces, and creative implementations of the technology.

Over the course of the weekend, the early OpenBCI community made great strides in all of these domains. Fascinating discussions were started on our recently created forum regarding topics such as 3D printable custom EEG headsets, building software classifiers, and techniques to lower the barrier of entry for newcomers to the OpenBCI platform!

We are now in the process of synthesizing all of the code that was written and finding the best way to make it more accessible to everyone. In addition, we were able to learn a lot next steps for version 3 of the OpenBCI hardware, which will be released to the general public upon the culmination of our Kickstarter campaign which is currently slated to be launched in early December.

We’d like to send a special thanks to Thoughtworks for providing their amazing workspace for the duration of the event. We are ever-grateful for giving us the opportunity to host what was hopefully the first of many OpenBCI hackathons. In addition, we like to thank everyone that was able to participate and generously donate their time and resources to help put some wind at the backs of what we believe is an amazing initiative to make brain-computer interfaces more powerful, affordable, and accessible.

Check out some of the great pictures taken during the event, and be sure to stay tuned for updates about upcoming hackathons! 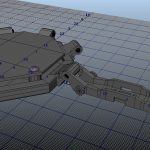